Home/News/Alma Pramac Racing and SHADO launch the interactive community Energy Generation for the 2018 MotoGP season
www.energygeneration.tv - A digital hub with exclusive content, user interaction and projects developed in collaboration with partners and sponsors 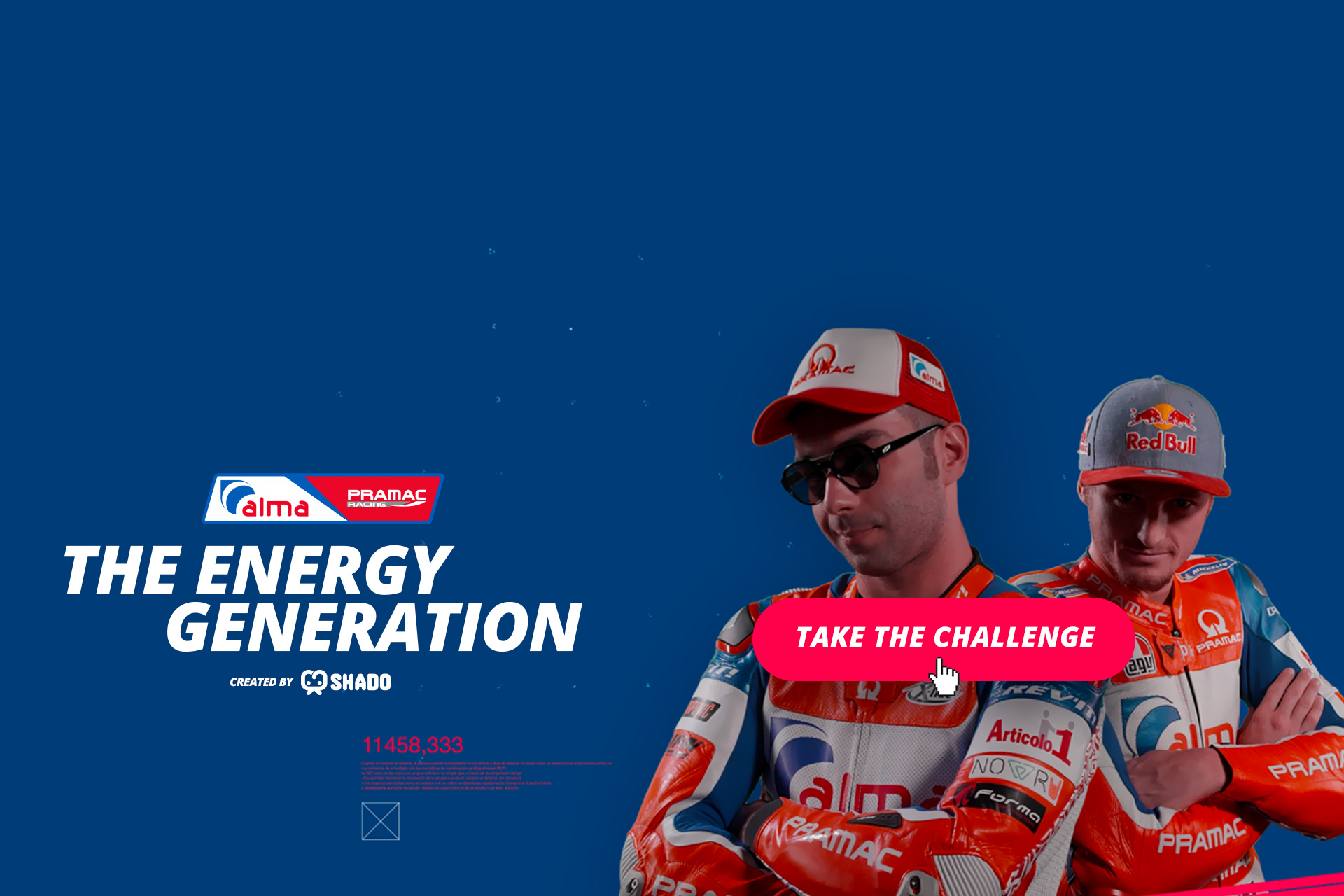 Alma Pramac Racing announces the launch of the interactive community Energy Generation created by SHADO, H-Farm’s media company, which will involve fans from around the world throughout the 2018 MotoGP season.
The MotoGP spectacle represents some of the most catalysing content for one of the most passionate, global and digital audiences; a context in which the DUCATI factory-supported team has always played a strongly proactive role.
It’s a completely new project in the world of two wheels, which exploits the potential of interactivity and spreads the emotions of the track through original entertainment formats and multi-platform engagement mechanics.
Energy Generation, accessible on www.energygeneration.tv and through the dedicated content on the team’s social network accounts, is presented with a manifesto video that portrays all the adrenalin and involvement, to launch the first episode of Race Show, a quiz where fans can test their general knowledge of the MotoGP world alongside star guests, members of the Alma Pramac Racing team, starting with riders Danilo Petrucci and Jack Miller.
The project envisages the launch of several contests throughout the 2018 season, rewarding fan involvement with personalised content, merchandising and exclusive experiences dedicated to them.
The platform is configured as a real digital hub where you can find space for exclusive content, user products and projects developed with partners and sponsors, involved more than ever in a 360-degree relationship with the team.

Davide Bartolucci (Founder & CEO of SHADO)
“For us, the launch of Energy Generation means taking the online entertainment model to a global scale, as happens in the box. This is another step in the relationship between fans and their passion, offering interactive experiences and shows conceived for platforms with fast media consumption and from which you expect small but significant gratification. It’s a project where brands in particular can try out truly innovative ways of involving the audience, going beyond the concept of followers but embracing the idea of community.”

Francesco Guidotti (Team Manager, Alma Pramac Racing)
“For a long time we’ve been thinking about developing a community project to build a more personal and interactive relationship with our fans that goes beyond intercepting the main digital engagement trends, which are increasingly relevant in the world of motor sports. SHADO’s vision and the innovative context of H-FARM has inevitably resulted in a partnership which we hope to be long-lasting and mutually satisfying.”

SHADO
For over ten years SHADO, an H-FARM company, has focused on the creation of interactive storytelling, branded content and cross-platform productions. It develops content and platforms that natively integrate the language of entertainment with interactivity and the potential offered by the whole digital media scenario. Here’s Where We’re Going lifts the curtain on a new business area which is focused on original productions, the Originals.

H-FARM
It is the innovation platform that supports the creation of new business models and the digital transformation and education of young people and Italian companies. Founded in January 2005, H-FARM was the first in the world to adopt a model that brought together education, investments, and business consultancy in one place. Since its founding until today, H-FARM has invested €26,2M to support the development of 106 innovative companies, has helped 200 of the most important international brands take advantage of the opportunities made possible by digital transformation and educates more than 1,000 students through an international and digital didactic path. Structured like a campus, it is destined to become the most important innovation hub in Europe and is currently undergoing an expansion that will grow its facilities from 14,000 mq of buildings with a 20-hectare park to 42,000 mq of buildings distributed over 51 hectares of land close to Venice. H-FARM employs more than 550 people in 5 different locations in Italy and is considered a singularity at an international level. Since November 13, 2015, H-FARM has been listed on the AIM segment of the Italian stock exchange and is available for public trading.