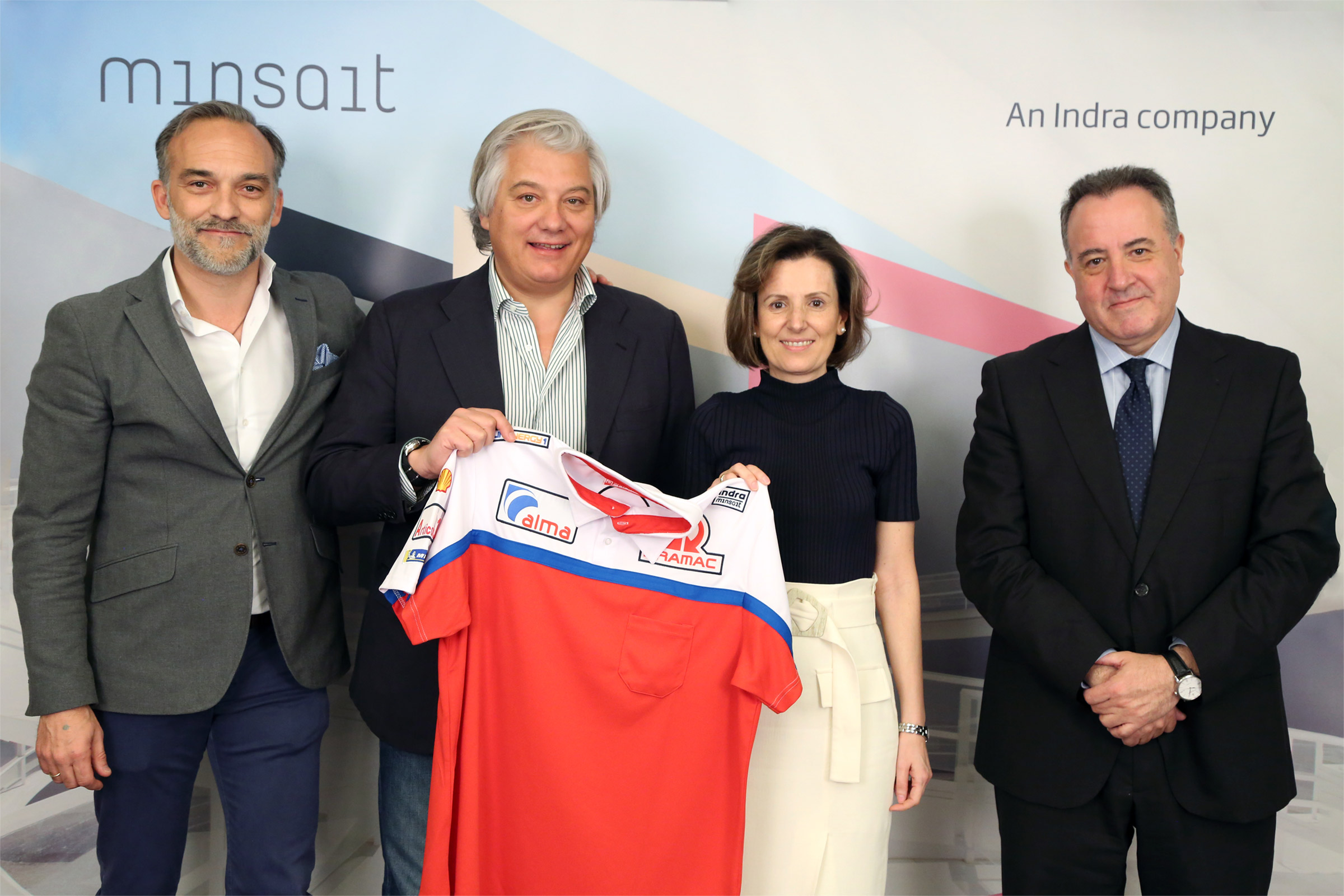 Alma Pramac Racing is pleased to announce that it has reached an agreement with Minsait, which will be sponsor of team in the 2019 MotoGP season.

Minsait, an Indra company, leader in the fields of Information Technology and Digital Transformation, gains a foothold in the premier category of MotoGP on the Ducati Desmosedici of Alma Pramac Racing that will have this season the experience of Jack Miller and the talent of Francesco Bagnaia, Moto2 world champion.

In the selection of the Ducati Factory Supported Team, the values shared with Minsait of innovation, commitment to young talent and sustainability were decisive. In 2010, Pramac Racing was a pioneer in the motorcycle circuit when it achieved the Green Energy Team certification for reducing energy consumption and generating its own solar energy. This adds to Alma Pramac’s recognized leadership in its field: it was named the “Best Independent Team” of the competition for the 2018 season.

The MotoGP world championship is one of the most innovative and technologically advanced competitions in the world. With the aim of improving the safety and performance of both motorcycles and riders, the teams have implemented in recent years the most advanced technologies in simulation, augmented reality, Internet of Things and Big Data, technologies in which Minsait is a global leader thanks to its innovation model and its commitment to RDI.

In fact, Minsait is, together with Indra, the parent company, one of the leaders in innovation in Europe due to its investment in Research and Development, according to the EU Industrial R&D Investment Scoreboard ranking that was recently published by the European Commission. In 2017, both companies jointly allocated more than 200 million Euros and 6.7% of their sales to this area.

Moreover, the consolidated presence of Pramac in Italy influenced the selection: Italy is the main subsidiary of Minsait on the Continent and constitutes the basis of the company’s renewed commitment to growth in Europe. The sponsorship agreement brings high visibility for Minsait in locations that are strategic for the company, such as Europe and Latin America, where several of the most popular championships and races take place.

“We are very proud that Minsait, one of the most innovative companies in the world, has chosen to sponsor our team at the MotoGP, because we share a firm commitment to innovation, passion and talent. With Minsait, we are teaming up with a partner that is a technological leader at the highest level which, in an extremely competitive and innovative environment such as the MotoGP, will give us an additional boost to achieve the great accomplishments we expect from our team”.

“At Minsait it is our mission to leave a mark by generating a significant and pioneering impact through innovation and talent. The values that inspire our activities include determination, commitment to collaboration and teamwork, as well as continuous support and enthusiasm. The agreement with Alma Pramac Racing reflects all these values and gives the company an amazing tool to publicize our technology and capabilities throughout the world”.

Minsait, an Indra company (www.minsait.com), is the leading firm in Digital Transformation Consultancy and Information Technologies in Spain and Latin America. Minsait possesses a high degree of specialization and knowledge of the sector, which it backs up with its high capability to integrate the core world with the digital world, its leadership in innovation and digital transformation, and its flexibility. Thus, it focuses its offering on high-impact value propositions, based on end-to-end solutions, with a remarkable degree of segmentation, which enables it to achieve tangible impacts for its customers in each industry with a transformational focus. Its capabilities and leadership are demonstrated in its product range, under the brand Onesait, and its across-the-board range of services.

Indra (www.indracompany.com) is one of the leading global technology and consulting companies and the technological partner for core business operations of its customers worldwide. It is a world leader in providing proprietary solutions in specific segments in Transport and Defense markets, and the leading firm in Digital Transformation Consultancy and Information Technologies in Spain and Latin America through its affiliate Minsait. Its business model is based on a comprehensive range of proprietary products, with a high-value focus and with a high innovation component. In the 2017 financial year, Indra achieved revenue of €3.011 billion, with 40,000 employees, a local presence in 46 countries and business operations in over 140 countries.